Bob was a life member of the Commemorative Air Force and a long time member of the Lone Star Wing. He served in the Air Force from 1950-54 where he was a pilot and he continued flying for the rest of his life. His pride and joy was his Blue and Yellow Navy PT-19 which he proudly flew to Air Shows all over East Texas. He also organized air shows in his hometown of Nacogdoches and participated as Announcer, Air Boss or as a welcome guest at any event he attended.

Bob was a community leader where he served as city commissioner of Nacogdoches for 10 years, county judge for four years, and mayor for three years.

Col Bob Dun will be missed by all that knew him and, as they say, may he fly in blue skies and calm winds forever! 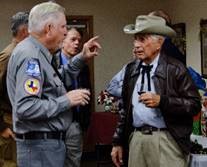 Prev:  The Lone Star Wing Visits the WWII Museum in New Orleans
Next: New Pilot Training on the Stearman!